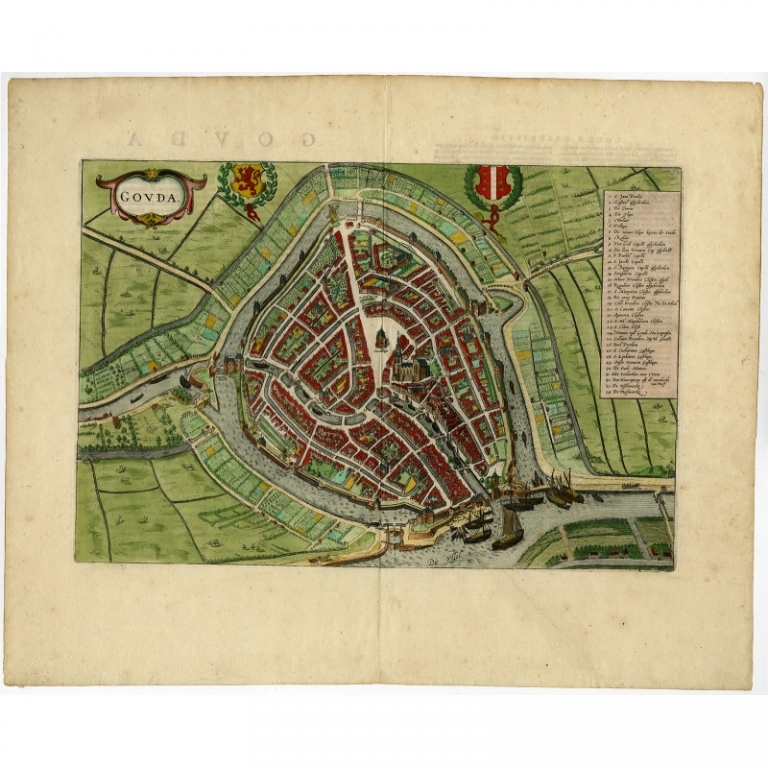 Description: Antique print, titled: 'Gouda.' - A bird's-eye view plan of Gouda in The Netherlands, with key to locations and coats of arms. This original engraved map originates from the famous six volume town book : 'Civitatis Orbis Terrarum.', published in Cologne, 1572-1617 by Georg Braun. The first volume of the Civitates Orbis Terrarum was published in Cologne in 1572. The sixth and the final volume appeared in 1617. This great city atlas, edited by Georg Braun and largely engraved by Franz Hogenberg (he created the first four volumes of the Civitates Orbis Terrarum. The fifth and sixth volume was created by Simon van den Neuwel (Novellanus), eventually contained 546 prospects, bird-eye views and map views of cities from all over the world. Braun was greatly assisted in his project by the close, and continued interest of Abraham Ortelius, whose Theatrum Orbis Terrarum of 1570 was, as a systematic and comprehensive collection of maps of uniform style, the first true atlas. The Civitates, indeed, was intended as a companion for the Theatrum,but appeared even more succesfull. Over a hundred of different artists and cartographers, the most significant of whom was Antwerp artist Georg (Joris) Hoefnagel (1542-1600), engraved the copper-plates from drawings. He not only contributed most of the original material for the Spanish and Italian towns but also reworked and modified those of other contributors. After Hoefnagel's death his son Jakob continued the work for the Civitates. A large number of Jacob van Deventer's (1505-1575), also known as Jacob Roelofszof, unpublished works, plans of towns of the Netherlands were copied, as were Stumpf's woodcuts from the Schweizer Chronik of 1548, and Munster's German views from the 1550 and 1572 editions of his Cosmographia. Another important source for maps was the Danish cartographer Heinrich van Rantzau (1526-1599), beter known under his Latin name Rantzovius, who provided maps of Northern Europe, specially of Danish cities. The Civitates provided a uniquely comprehensive view of urban life at the turn of the sixteenth century. Other sources were the maps of Sebastian Munster from around 1550 and , and of. Braun added to the maps figures in local dress. This feature was anticipated in Hans Lautensack's etched view of Nuremberg, 1552, those groups of citizens in the rural foreground add further authenticity to the highly accurate topographical details of what was effectively Germany's cultural capital at that time. Braun's motives for adding figures to the views, however, went further: as stated in his introduction to book 1, he believed, perhaps optimistically, that his plans would not in consequence be scrutinized for military secrets by the Turks, as their religion forbade them from looking on representations of the human form.

Antique print, titled: 'Gouda.' - A bird's-eye view plan of Gouda in The Netherlands, with key to locations and coats of arms.