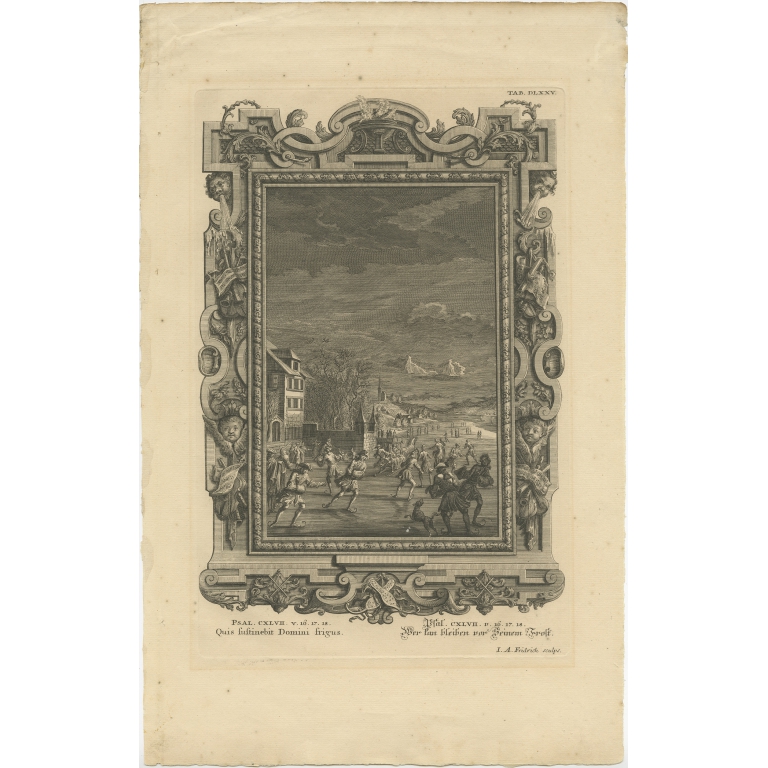 Description: Antique print titled 'Quis sustinebit Domini frigus (..). This original antique print shows an ice skating scene to illustrate psalm 147: Who can withstand the cold? Originates from 'Physica Sacra' by Johann Jakob Scheuchzer. Scheuchzer believed that the Old Testament was a factual account of the history, of the world. He initiated a major project to explain Biblical events in terms of physics, medicine, and natural history. His aim was to prove the existence of God through science, but the Swiss authorities initially refused to grant him a permit to publish it. Eventually a lushly illustrated edition of this extraordinary work was printed between 1731 and 1735 in the important German publishing center Augsburg. Entitled 'Jobi physica sacra oder Hiobs Natur-Wissenschaft verglichen mit der heutigen', the work became known as the Physica Sacra or the Kupfer-Bibel. It became famous for its elaborate baroque illustrations, in which each biblical story was framed with an architectural border containing details relevant to the chapter depicted. The plates were engraved by the best engravers of its time incl. Sperling, Corvinus, Friedrich, Heumann, Sedlezky, Tyroff a.o.

Artists and Engravers: Johann Jakob Scheuchzer (1672-1733) was a physician by training, with a strong interest in natural history and paleontology. Born in Switzerland, the son of a physician, he studied at University in Germany & later returned to Zurich to take a professorship in Mathematics. Like many scientists of the day, he considered the Old Testament a factual account of the history of the earth