> Antique Prints>Antique Views >America>Antique Print of a Mandan Village made after Bodmer (c.1840)

Antique Print of a Mandan Village made after Bodmer (c.1840) 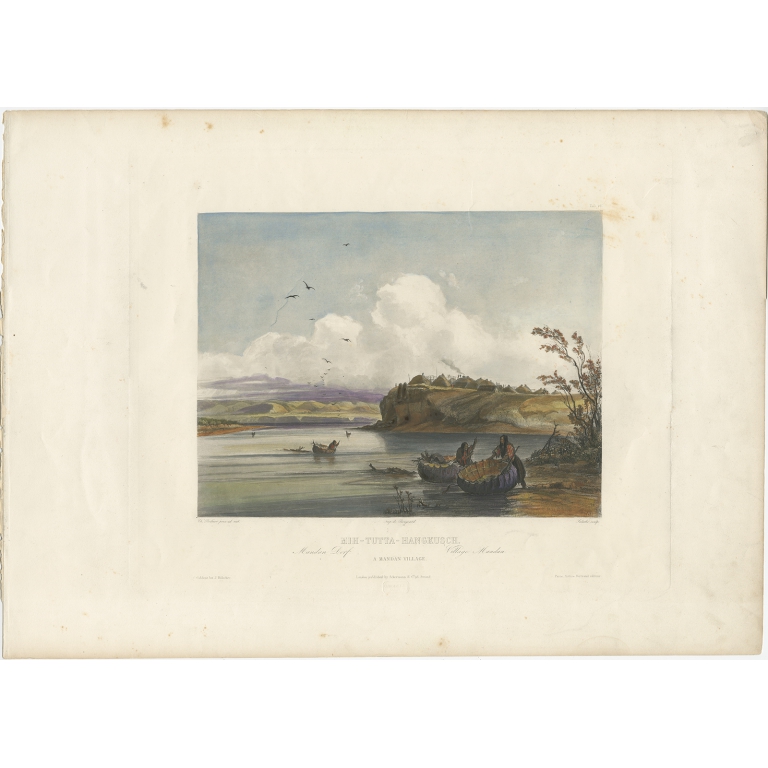 Description: Antique print titled 'Mih-Tutta-Hangkusch'. Hand-coloured aquating of a Mandan village by Salathé after Bodmer. In response to raids by its neighbours, the Mandan Tribe consolidated its people in two main villages: Mih-Tutta-Hang-Kusch and Ruhptare. Mih-Tutta-Hang-Kusch, the larger of these, is represented here by Bodmer as it appeared in the summer of 1833. Close to Fort Clark, it consisted of sixty-five earth lodges or houses, many with scaffolding around the houses that was used for drying corn and other food. The village's position, high on a promontory jutting out into the Missouri, made it easily defensible. However, all is tranquil in this scene as the women in the foreground collect driftwood using bullboats: circular vessels constructed from a willow frame over which was stretched and secured a raw bull buffalo hide, which was then allowed to dry and shrink into place. Light yet durable, these vessels were ideally suited to their purpose in the hands of an adept helmswoman.

Artists and Engravers: Karl Bodmer's images show great versatility and technical virtuosity and give us a uniquely accomplished and detailed picture of a previously little understood (and soon to vanish) way of life. Swiss-born Bodmer was engaged by Prince Maximilian zu Wied-Neuwied (1782-1867) specifically to provide a record of his travels in North America, principally among the Plains Indians. In the company of David Dreidoppel (Prince Maximilian's servant and hunting companion), their travels in North America were to last from 1832 to 1834. Well-armed with information and advice, the party finally left St.Louis, on the most important stage of their travels, aboard the steamer Yellow Stone on April 10 1833. They proceeded up the treacherous Missouri River along the line of forts established by the American Fur Company. At Bellevue they encountered their first Indians, then went on to make contact with the Sioux tribe, learning of and recording their little known ceremonial dances and powerful pride and dignity. Transferring from the Yellow Stone to another steamer, the Assiniboin, they continued to Fort Clark, visiting there the Mandan, Mintari and Crow tribes, then the Assiniboins at Fort Union, the main base of the American Fur Company. On a necessarily much smaller vessel they journeyed through the extraordinary geological scenery of that section of the Missouri to Fort Mackenzie in Montana, establishing a cautious friendship with the fearsome Blackfeet. From this, the westernmost point reached, it was considered too dangerous to continue and the return journey downstream began. The winter brought its own difficulties and discomforts, but Bodmer was still able to execute numerous studies of villages, dances and especially the people, who were often both intrigued and delighted by his work. The portraits are particularly notable for their capturing of individual personalities, as well as forming a primary account of what were to become virtually lost cultures.