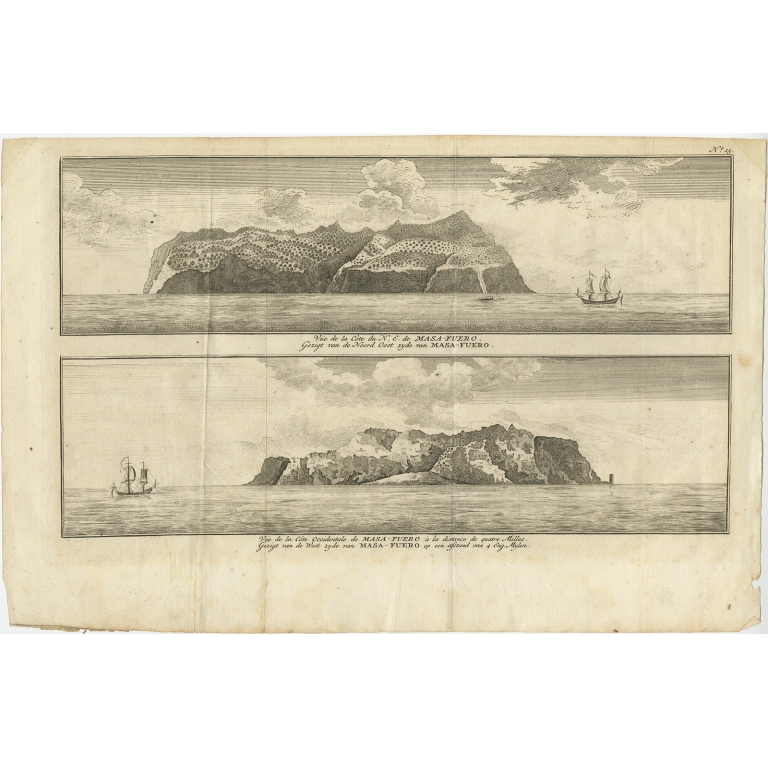 Description: Plate no.15: 'Vue de la cote du N. E. de Masa-Fuero.' 'Vue de la cote occidentale de Masa-Fuero a la distance de quatre milles.' View of the N.E. side of Masa-Fuero; View of the westside of Masa-Fuero from a distance of 4 miles. Part of Juan Fernadez islands. This print originates from 'Reize Rondsom De Werreld, Gedaan in de Jaaren 1740 tot 1744.', by Richard Walter, the Dutch edition of the 'A voyage round the world...', first published in 1749. Admiral of the Fleet George Anson, 1st Baron Anson PC, FRS, RN (1697 -1762) was a British admiral and a wealthy aristocrat, noted for his circumnavigation of the globe and his role overseeing the Royal Navy during the Seven Years' War. Anson commanded the small British squadron sent at the beginning of the war with Spain to harass the Spaniards on the west coast of South America and cut off their supplies of wealth from the Pacific. Disasters and hardships plagued the expedition; most of the ships were lost around Cape Horn, and on the Chilean coast, and of a crew of 960, less than 350 survived. Eventually the Centurion alone was left, but Anson persevered and succeeded in capturing a gold-laden Spanish galleon near Manila. The prize he earned as a result settled his fortune for life. This is the official account of his voyage of circumnavigation, compiled from Anson's journals by Richard Walter, chaplain on board the Centurion, and revised by Benjamin Robins.