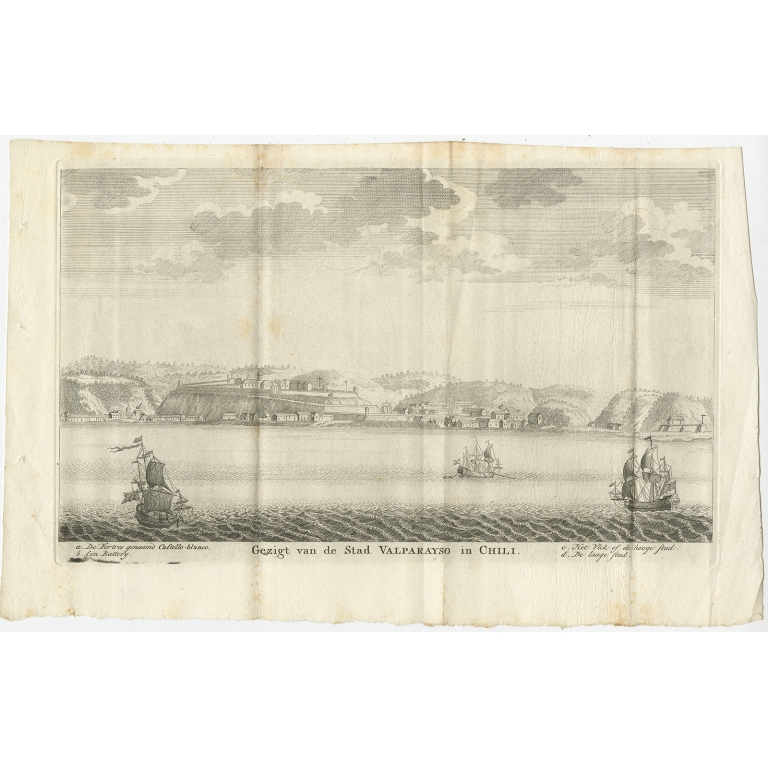 Description: Antique print titled 'Gezigt van de Stad Valparayso in Chili'. Detailed view of the city and port of Valparaíso, Chile. With Dutch key. As indicated by the presence of the fort and battery, Valparaíso was a fortified town on the Chilean coast, one of several Spanish fortresses that sprinkled the western coast of South America. Prior to Spanish colonization, the bay was populated by Picunche and Chango peoples. When the Spanish arrived in 1536, Juan de Saavedra, their leader, named the bay for his town in Spain, Valparaíso de Arriba.

The fort, called San José or Castillo Blanco, was first constructed in 1678-82, with modifications to 1692. Today, the fort is almost entirely forgotten, lost in the rapid growth of the city in the nineteenth century. This is a rare glimpse of Valparaíso when it was a coastal town, not the mighty port it would become after the construction of the first pier in 1810.

This print originates from volume 2 of 'Hedendaagsche historie, of tegenwoordige staat van Amerika' by Th. Salmon.

Artists and Engravers: Published by I. Tirion.