Antique Print of Anfa, Azamor and Diu by Braun & Hogenberg (1574) 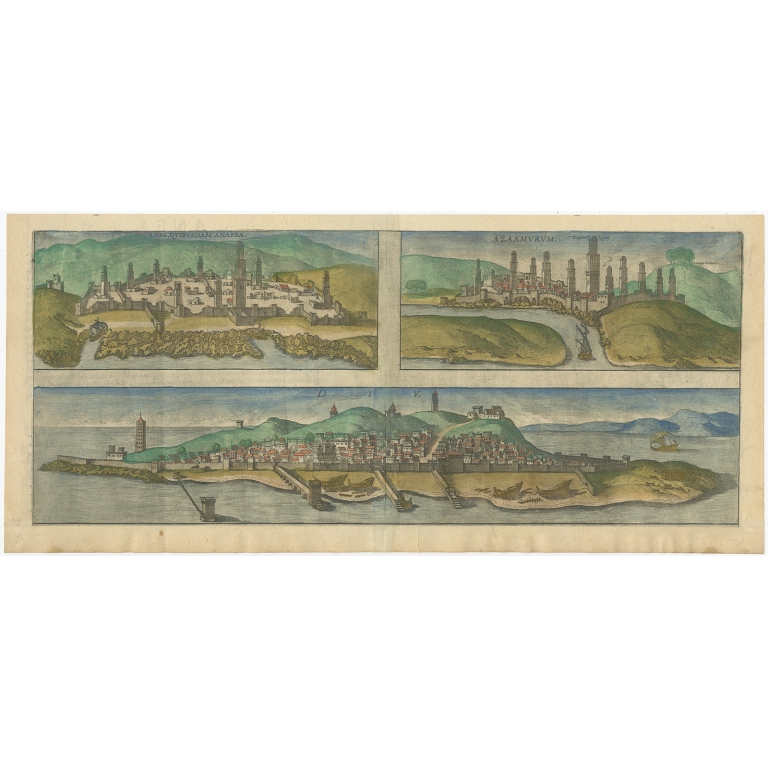 Description: Antique print titled 'Anfa, Quibusdam Anaffa / Azaamurum / Diu'. Three views on one sheet depicting Casablanca (Anfa), Azemmour (Azamor) and Diu. Anfa is an ancient site which has been inhabited for millenia. Early settlement was by the Berbers in about the tenth century BCE, following which it was a port for the seagoing Phoenicians. Eventually it became a major commercial port of the Roman Empire and was officially incorporated into the empire by Caligula. Following the Vandal conquest of northern Africa in the 5th century AD, the area was under the control of a number of different Berber groups until the 15th century when pirates began to use the port as a safe harbour, and in 1486 it was raided and destroyed by the Portuguese, who used building materials from its ruins to build a fort nearby which became the city known as Casablanca. Anfa is depicted here as it appeared following its destruction and purposeful razing to the ground by the Portuguese. The scene is one of abject desolation. Some towers have survived and the outline of the city’s walls is clear though the walls themselves have suffered significant damage, leaving them worthless as fortifications, but valuable as material for the building of a new city, Casablanca, which today is the economic and commercial capital of Morocco.

Azemmour (Azamor) is a city which lies on the left bank of the Oum Rabie River about 45 miles south of Casablanca. At the time the Portuguese destroyed Anfa, Azemmour became a tribute paying Portuguese vassal until 1508 when the Portuguese conquered the city. In 1513 Azenmmour’s governor refused to pay the tribute and was able to raise a fairly powerful and well-equipped army to oppose Portugal. In response to the challenge a massive fleet and legions of soldiers, including Ferdinand Magellan of circumnavigation fame, were sent to subdue the city which fell with no resistance from its inhabitants. Portuguese control of the city was short-lived due to Portuguese economic woes, and in 1541 the city was abandoned by them. Azenmmour is depicted as a small but well-fortified settlement with numerous high towers resembling those in Italian hill towns. High walls surround the town and a waterway secures one side. A frigate is pictured sailing toward the city.

Diu is an island at the entrance to the Gulf of Cambay in the Indian Ocean. Controlling it was important in the era of colonization and empire building, as a few smartly placed cannons on the island could easily enable it to dominate and even control trade and commerce taking place along the entire Indian Ocean rim. The view of the island here is from a perspective at sea. A number of towers are depicted along the walled fortifications which appear to encircle the entire island, which measures only 15 miles square. The struggle for dominion over it culminated in a fierce naval battle in 1509 which pitted the Portuguese against a combined fleet of Egyptian, Arab and Indian forces. The Portuguese conquered the fleet thus securing the country’s supremacy in the Indian Ocean.

This print originates from 'Civitates Orbis Terrarum' by Braun & Hogenberg.