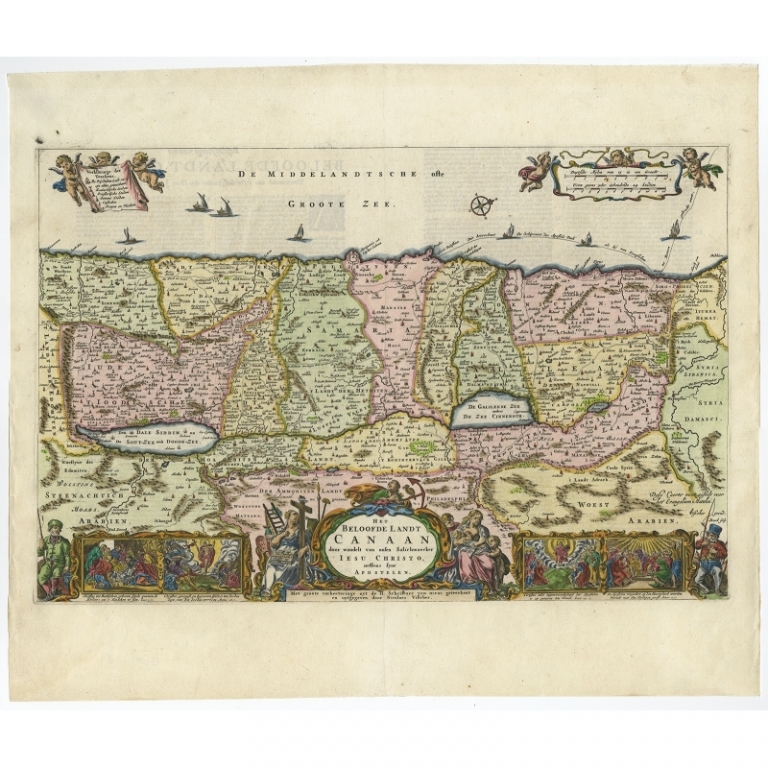 Description: Antique map titled 'Het Beloofde Landt Canaan door wandelt van onsen Salichmaeker Jesu Christo neffens syne Apostelen.' Detailed map of the Holy Land, showing the travels of Christ and the Apostles, including Paul's travel's at sea and numerous sailing vessels. Below bible scenes such as the nativity and crucifiction of Christ. An excellent example of a Duch Bible map. Dutch text on verso. Source unknown, to be determined.

Artists and Engravers: Made by 'Nicolaes Visscher' after an anonymous artist. For nearly a century the members of the Visscher family were important art dealers and map publishers in Amsterdam. The founder of the business, C. J. Visscher, had premises near to those of Pieter van den Keere and Jodocus Hondius whose pupil he may have been. From about 1620 he designed a number of individual maps, including one of the British Isles, but his first atlas consisted of maps printed from plates bought from van den Keere and issued as they stood with some additions of his own, including historical scenes of battles and sieges for which he had a high reputation. Some maps bear the latinized form of the family name: Piscator. After Visscher's death his son and grandson, both of the same name, issued a considerable number of atlases, constantly revised and brought up to date but most of them lacking an index and with varying contents. The widow of Nicholaes Visscher II carried on the business until it finally passed into the hands of Pieter Schenk.