Antique Map of the Seventeen Provinces by Mercator (1606) 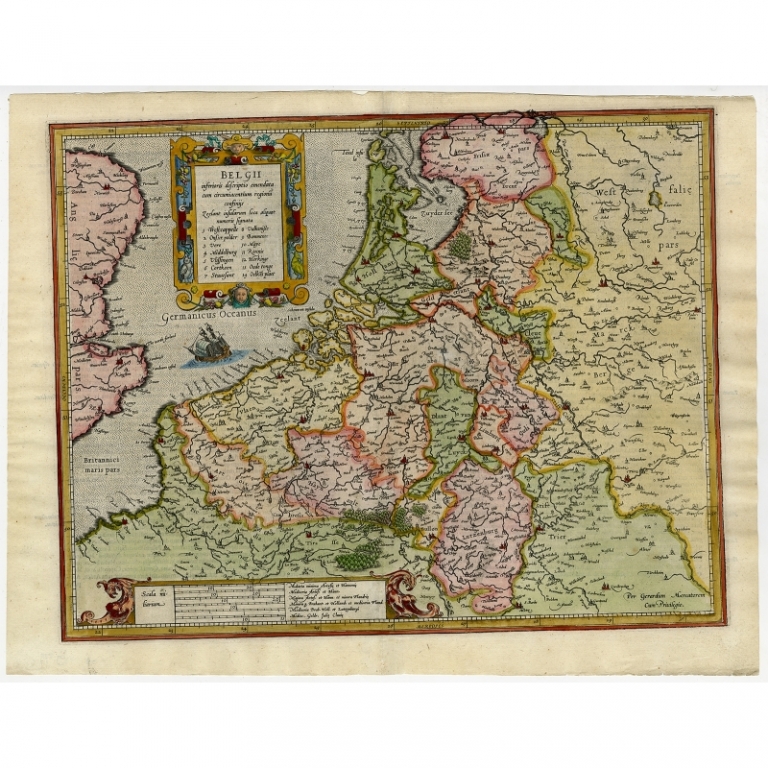 Description: Antique map titled 'Belgii inferioris descriptio (..)'. Old map of the Seventeen Provinces, the Imperial states of the Habsburg Netherlands in the 16th century. They roughly covered the Low Countries, i.e. what is now the Netherlands, Belgium, Luxembourg, and most of the French departments of Nord (French Flanders and French Hainaut) and Pas-de-Calais (Artois). From the Mercator-Hondius Atlas of 1606. The variant b (1:101) with Friesland extended over the border of the actual map. Ref: Koeman 3000:1A, 1:101 (1606 Latin).

Artists and Engravers: Gerard Mercator (Kremer) was born in Rupelmonde in Flanders and studied in Louvain. He made his first map in 1537 and became a cartographer and globe maker. In 1552 he moved to Duisburg, Germany where he published his famous 18-sheet world map in 1569 with his own new projection, today called Mercator projection. Later he decided to publish a new edition of Ptolemy's Geographia. Followed by his major work, a 3 volume collection of maps to which the word "Atlas" was applied the first time. The first volume was published 1585, followed by the second in 1589 and the third one after his death in 1595 by his son Rumold. A second edition of all three parts was published 1602. In 1604 Jodocus Hondius acquired the plates and published several editions together with his sons Jodocus II and Henricus until 1633. More editions followed until 1666 by Janssonius who was in partnership with Henricus. Some of the plated where also used in W.J. Blaeu in 1630.