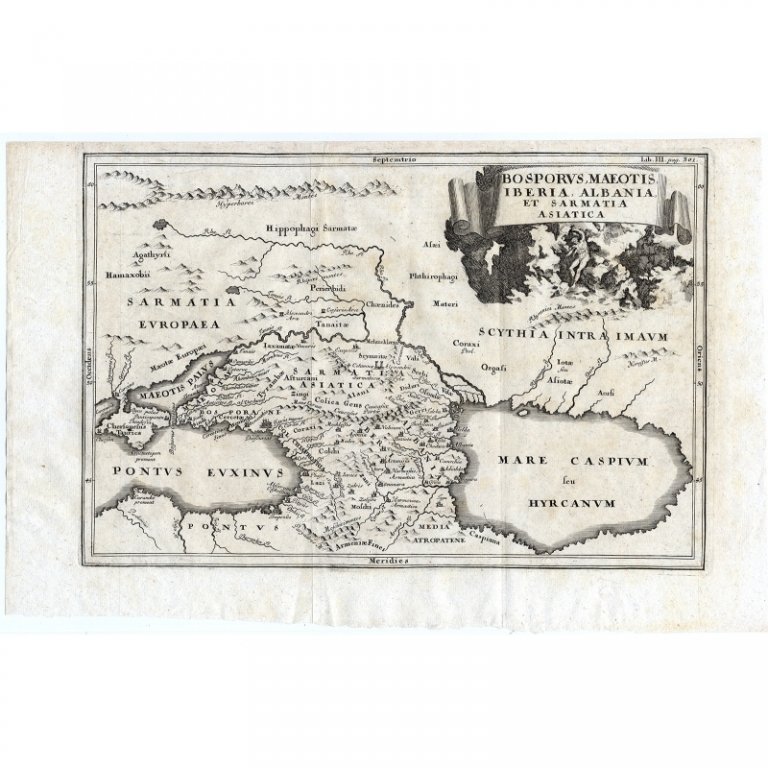 Description: Antique map titled 'Bosporus, Maeotis, Iberia, Albania, et Sarmatia Asiatica.' Map of the region between the Black and Caspian Seas in early Sarmatian times about 300 BC. Birthplace of the white race in ancient times. The Albanians and Iberians after the folkish wanderings in early Christian times wound up respectively in the Balkans and Spain. To the east north of the Caspian Sea are the warlike Scythians, much feared as the Horde. In the distance to the northwest are the mythical Hyperborean Mountains. This authentic print originates from: 'Notitia orbis antiqui, sive geographia plenior', by Christoph Cellarius, ed. published in Leipzig by Johann Frederick Gleditsch in 1731-32. Ref. Brunet I, 1724. Ebert 3868. An early standard work on the geography of Classical Antiquity first published in 1686.

Artists and Engravers: Author: Christoph Cellarius (1638 - 1707) or Christopher Keller was a German scholar, historian and textbook publisher. Cellarius held academic positions in both Weimar and Halle. Cellarius's most important work was his 1683 publication of 'A Universal History Divided into an Ancient, Medieval, and New Period.' It was in this work that the concept of history as divisible into three distinct periods (Ancient History, Mediaeval History, and Modern History) was introduced. It had great impact on the way future historians would interpret the past.