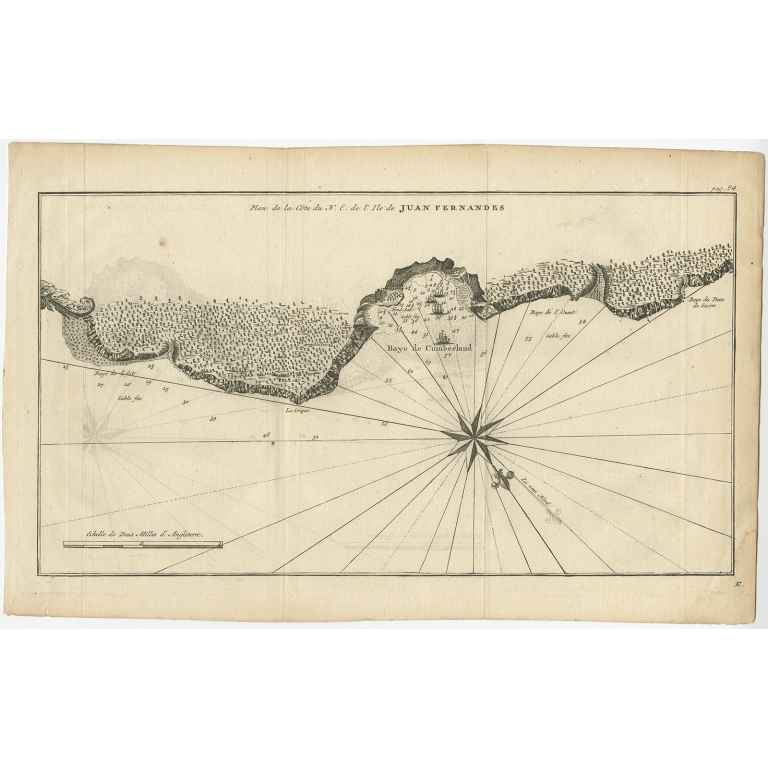 Description: Antique map titled 'Plan de la Côte du N.E. de l 'Ile de Juan Fernandes'. Map of the northeast coast of the island of Juan Fernandez with Cumberland Bay, South America. In 1740 Anson set sail in command of a squadron sent to attack Spanish possessions and interests in South America. The expedition was ill-equipped and failed to carry out its original ambitious mission. By June 1741 when Anson reached Juan Fernandes, his force had been reduced to only three of the original six ships, while the strength of his crews had fallen from 961 to 335. After launching several attacks on the west coast of South America and recuperating on the island he collected the remaining survivors on his flagship, the Centurion, and set sail in search of one of the richly laden galleons that conducted the trade between Mexico and the Philippines. The indomitable perseverance he had shown during one of the most arduous voyages in the history of sea adventure gained the reward of the capture of an immensely rich prize, the Nuestra Señora de Covadonga, which he encountered off Cape Espiritu Santo on June 20, 1743. Source unknown, to be determined.