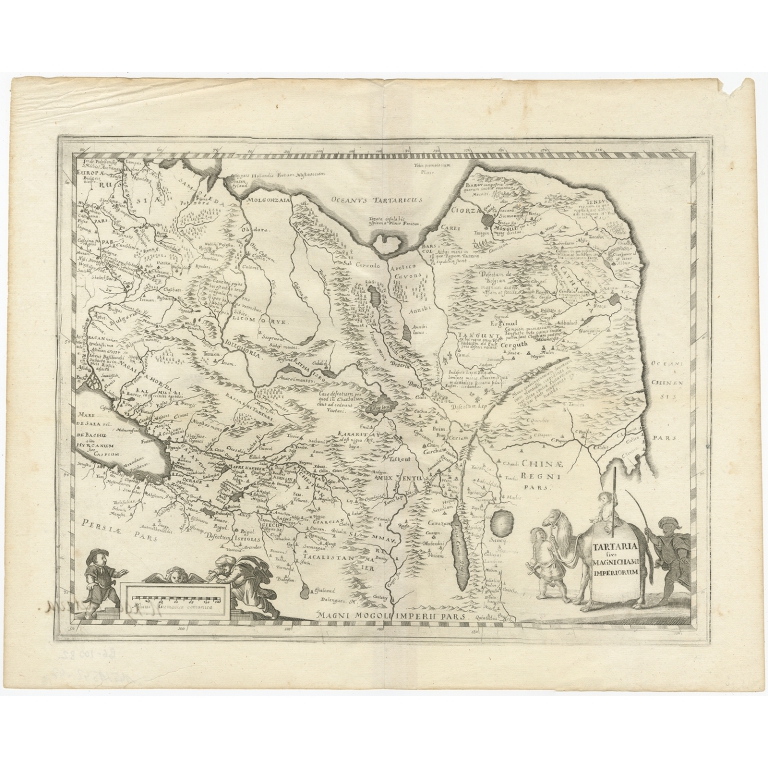 Description: Antique map titled ‘Tartaria sive Magnichami Imperiorum‘. Early map of Siberia based upon the journals of Marco Polo. The map covers from the Caspian Sea and the Volga River east as far as the China Sea and the city of Xanadu. It extends north to Nova Zembla and south to the Upper Ganges River. When Blaeu drew this map this part of the world was almost entirely unknown. Blaeu relied on the journals of Marco Polo to compile most of the map. Devils and dragons frolic in the Lop Nor and far to the north the summer seat of Kublai Khan's Yuan Empire Xanadu (Shangdu) is noted. The Great Wall of China appears prominently. Further west, the Geography becomes more stable with recognizable Silk Route centers such as Samarkand clearly identified. The title is set into a saddle blanket on the back of a dromedary. Mountains and forests are rendered pictorially. This map is distinguished from Jansson's very similar map by Blaeu's inclusion of degrees of longitude along the borders and meridians crossing the map.

Artists and Engravers: The Blaeu firm was founded in 1596 by Willem Janzoon Blaeu (1571-1638). It was in this initial period, from 1596 to 1672, under the leadership of the Willem Blaeu and with this assistance of his two talented sons Cornelius (1616-1648) and Johannis (1596-1673), that the firm was most active. Their greatest cartographic achievement was the publication of the magnificent multi-volume Atlas Major.