> Antique Maps>Europe>West Europe>France>Antique Map of the region of Calais and the Vermandois region by Ortelius (c.1602)

Antique Map of the region of Calais and the Vermandois region by Ortelius (c.1602) 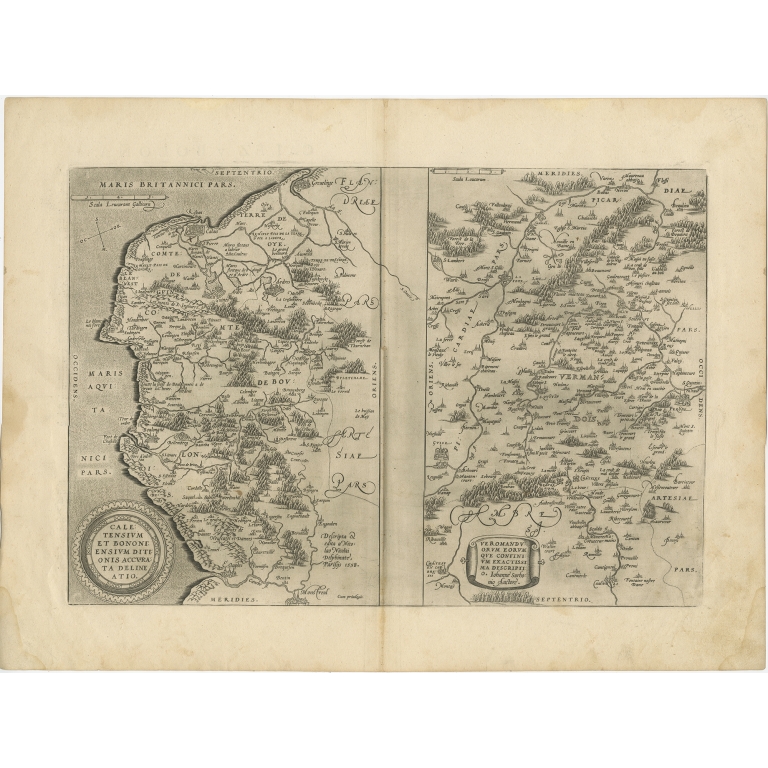 Description: Antique map titled 'Caletensium et Bononiensium (..) - Veromandorum eorum que confinium (..)'. Two detailed regional maps by Ortelius. The first map shows Belgian and French Coastal region, from Estaples to Gruerlinge, including Calais and Boulogne. The second shows the region centered on Perone and S. Quintin, along the Sere and Oyse Rivers. This map originates from a Spanish edition of 'Theatrum Orbis Terrarum' by A. Ortelius, published circa 1602.

Artists and Engravers: Abraham Ortelius (1527 -1598) was a Flemish cartographer, cosmographer, geographer and publisher and a contemporary of Gerard Mercator, with whom he travelled through Italy and France. Although it is Mercator who first used the word "Atlas" as a name for a collection of maps, it is Ortelius who is remembered as the creator of the first modern atlas. 'Theatrum Orbis Terrarum' was the first systematically collated set of maps by different map makers in a uniform format. Three Latin editions as well as a Dutch, French and German edition of 'Theatrum Orbis Terrarum' were published by 1572 and a further 25 editions printed before Ortelius' death in 1598. Several more were subsequently printed until around 1612. Ortelius is said to have been the first person to pose the question of the continents once being a single land mass before separating into their current positions.