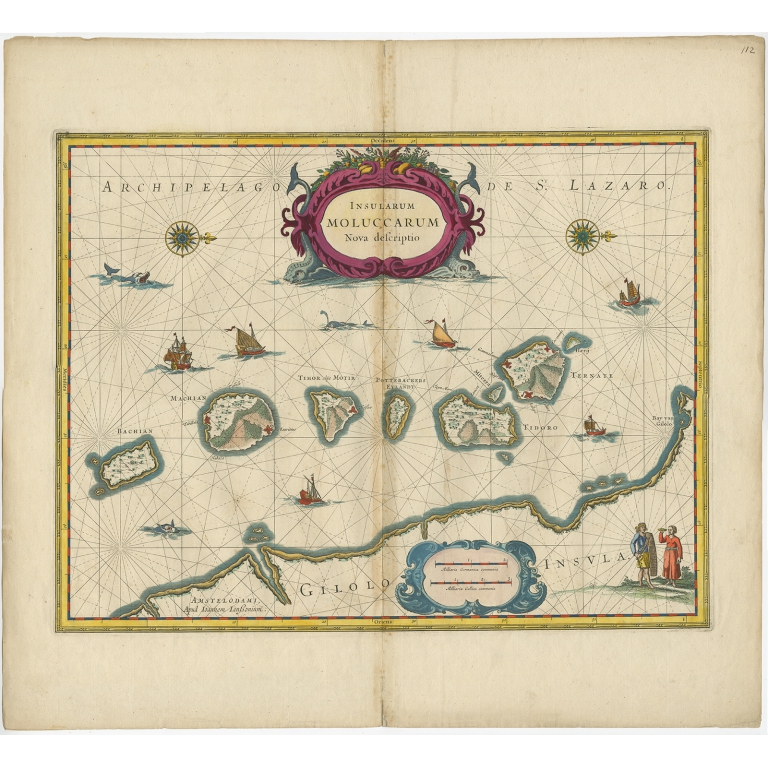 Description: Antique map titled 'Insularum Moluccarum Nova Descriptio.' Beautiful map of the Moluccas. The famous Spice Islands, the cornerstone of the Dutch trading empire in the East Indies throughout the 17th Century, is the focus of this exquisite map. Similar to Blaeu's map, except that it extends further south to include the island of Bachian. The very decorative title cartouche is supported by two sea monsters, and another cartouche contains the scale of miles. It is further embellished with various sailing vessels, sea monsters, two elaborate compass roses with north oriented to the right, and a native couple displaying the costumes and weapons of the region.

Artists and Engravers: Made by 'Johannes Janssonius' after an anonymous artist. Johannes Janssonius also known as Jan Jansson was born 1588 in Arnhem, Netherlands. His father was a bookseller and publisher (Jan Janszoon the Elder). When he married the daughter of the cartographer Jodocus Hondius he also set up a business as book publisher in Amsterdam. His first map was published in 1616. Around 15 years later he set up a partnership with his brother in law Hondius add issued further editions of the Mercator/Hondius atlas. After his death in 1664, his heirs still have published several maps. Many of his plates have been acquired by Pieter Schenk and Gerard Valk.