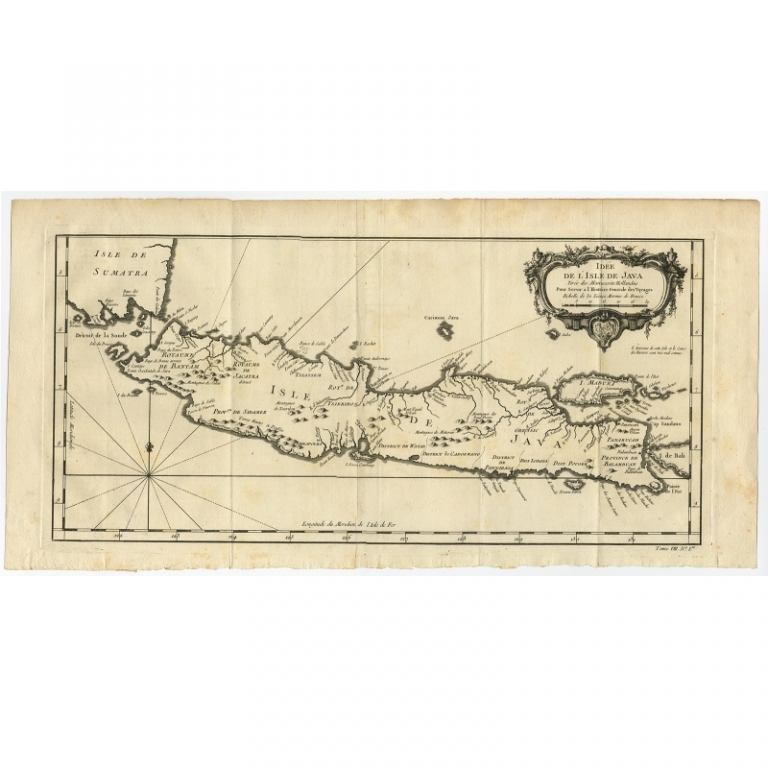 Description: Antique map titled 'Idee de l'Isle de Java.' Well engraved and attractive chart of the island shows all principal harbors and coastal details, plus rivers, mountains and volcanoes, bays, the settlements and villages, and political districts. Locates Batavia (Jakarta). Map also includes Madura Island, most of Bali, the Sunda Strait with the Krakatau Islands, and the southeastern tip of Sumatra. The island is divided into provinces and the kingdoms of Bantam, Tsieribon and Jacatra. Decorated with a very fancy rococo-style title cartouche and rhumb lines with fleur-de-lys. Source unknown, to be determined.

Artists and Engravers: Made by 'Jacques Nicolas Bellin' after an anonymous artist. Jacques Nicolas Bellin (1703 - 1772) was a French hydrographer, geographer, and member of the French intellectual group called the philosophes. Bellin was born in Paris. He was hydrographer of France's hydrographic office, member of the Academie de Marine and of the Royal Society of London. Over a 50 year career, he produced a large number of maps of particular interest to the Ministere de la Marine.