Antique Map of Russia Tartary and Part of China by Chatelain (c.1732) 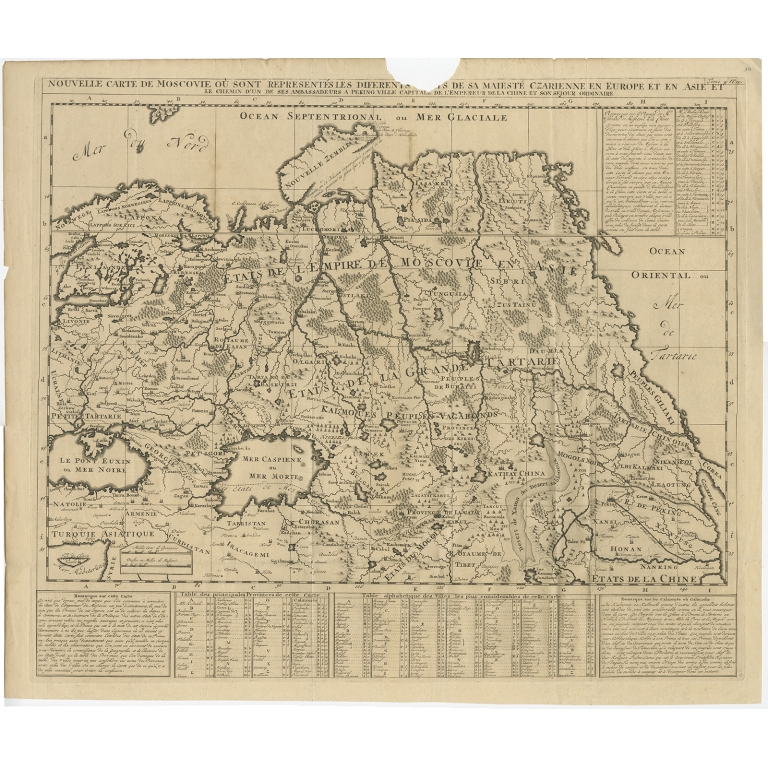 Description: Antique map titled 'Nouvelle Carte de Moscovie où sont representés les differents etats de sa Maiesté Czarienne (..)'. Map of Russia Tartary and part of China with key tables to the towns. Depicting the different states belonging to the Czar in Asia and Europe, showing the path of one of his ambassadors to Peking. The Great wall of China is shown.

Artists and Engravers: Henri Abraham Chatelain (1684-1743) was a Huguenot pastor of Parisian origins. Chatelain proved a successful businessman, creating lucrative networks in London, The Hague, and then Amsterdam. He is most well known for the Atlas Historique, published in seven volumes between 1705 and 1720. This encyclopedic work was devoted to the history and genealogy of the continents, discussing such topics as geography, cosmography, topography, heraldry, and ethnography. Published thanks to a partnership between Henri, his father, Zacharie, and his younger brother, also Zacharie, the text was contributed to by Nicolas Gueudeville, a French geographer. The maps were by Henri, largely after the work of Guillaume Delisle, and they offered the general reader a window into the emerging world of the eighteenth century.