Antique Map of North and East Asia by Diderot (1751) 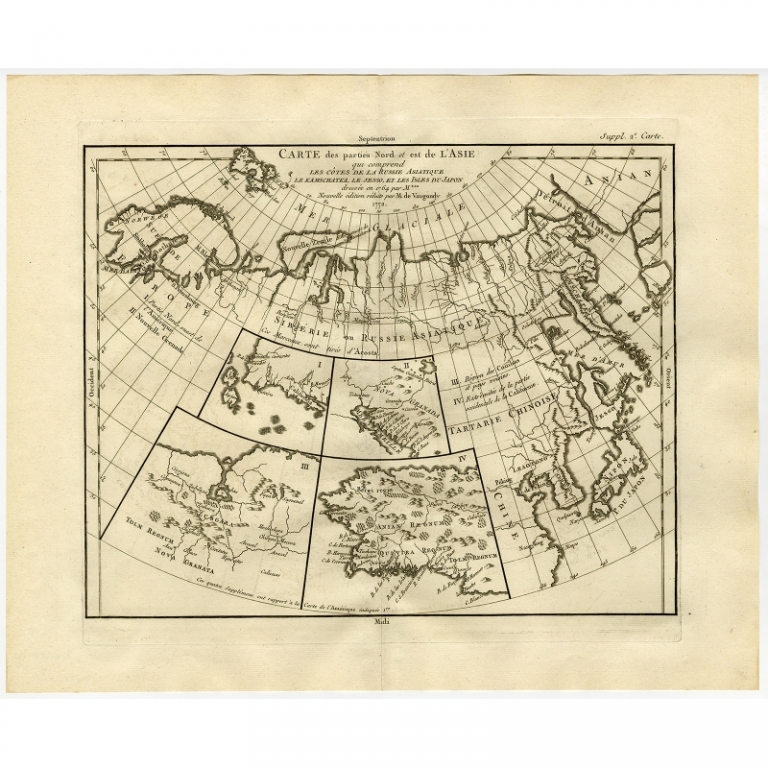 Description: Map 2: 'Carte des parties nord et est de L'Asie'. (Map of the Northern parts and East Asia.) Five maps on one sheet, showing California, Alaska and Siberia, Korea and Japan. South to Korea the island "Quelpaerts". This map shows the Bering Straits an extended Alaska, Japan and a curious Jesso and California as an peninsular. This map originates from the plate section.

This old antique print originates from: 'The Encyclopédie ou Dictionnaire raisonné des sciences, des arts et des métiers, par une Société de Gens de lettres.' which was published under the direction of Diderot and d'Alembert, with 17 volumes of text and 11 volumes of plates between 1751 and 1772. It contained 72,000 articles written by more than 140 contributors. This encyclopdia was a massive reference work for the arts and sciences, as well as a means to propagate the ideas of the French Enlightment. The impact of this encyclopedia was enormous.

Artists and Engravers: Denis Diderot (1713-1784) was a French philosopher, art critic and writer. Jean le Rond d'Alembert (1717-1783) was a French mathematician, mechanician, physicist and philosopher. These plates are engraved by J.A.Defehrt and Bonaventure/Benoit-Louis Prevost after J.R Lucotte or Goussier. Gilles Robert de Vaugondy, a French cartographer with connection to the Sanson family, was born 1688 in Paris. He used Sanson's plates and also acquired plates of Jaillot. His major work was the beautiful "Atlas Universel" first issued in 1757. He died 1766 in Paris.