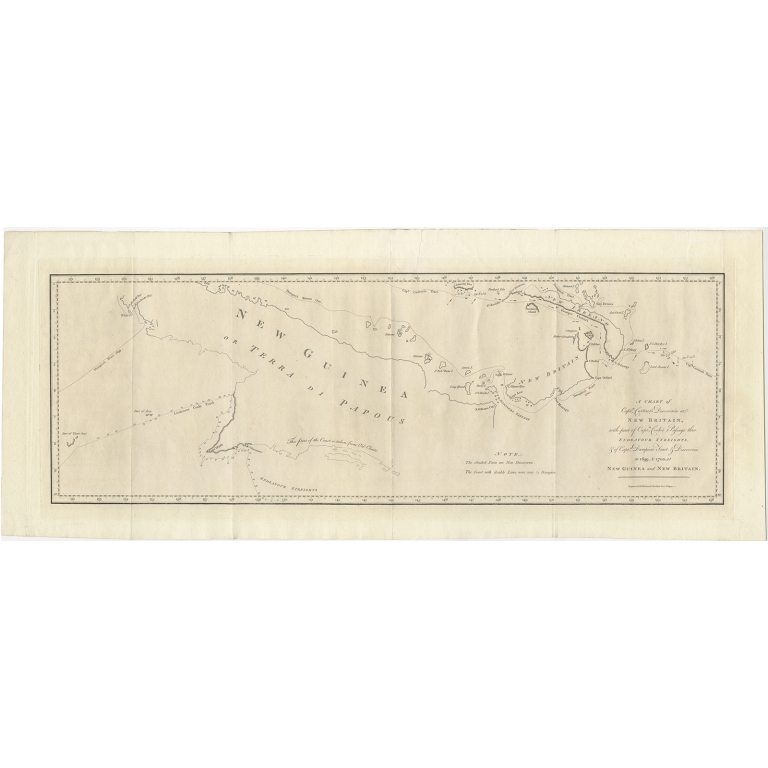 Description: Antique map titled 'A Chart of Captain Carteret's Discoveries at New Britain, with part of Captain Cooke's Passage thro Endeavour Streights, & of Captain Dampier's tract & discoveries in 1699 & 1700, at New Guinea and New Britain'. This sea chart of Papua New Guinea shows the new discoveries of Captains Cook, Carteret, and Dampier along New Guinea, New Britain, and New Ireland. The chart details the path of Captain Cook's voyage along the southwestern coast of the island of New Guinea in today's Irian Jaya, Indonesia's easternmost province. Cook sailed between Australia and New Guinea and proved the existence of the Strait of Torres. The chart also details the explorations of Carteret and Dampier which focused on the northern portion of New Guinea and the nearby Pacific islands. Published in John Hawkesworth's 'An Account of the Voyages Undertaken by the Order of his Present Majesty for Making Discoveries in the Southern Hemisphere, and Successively Performed by Commodore Byron, Captain Wallis, Captain Carteret, and Captain Cook'.