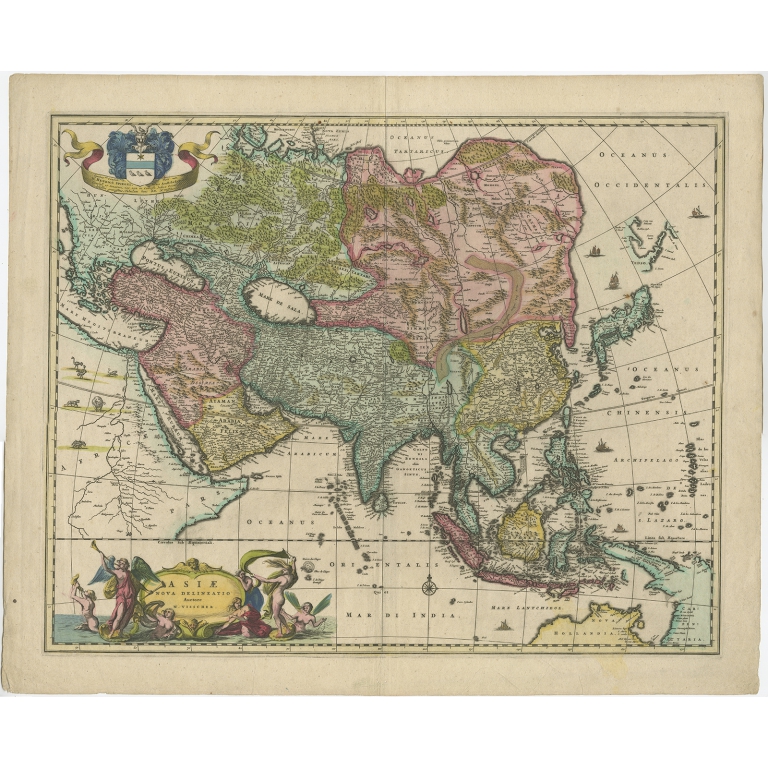 Description: Antique map titled 'Asiae nova delineatio'. Decorative map of Asia and the East Indies. The map shows Korea as a peninsula. In China the Great Wall is depicted, as well as a long stretch of desert, identified as the Xamo. Australia and New Guinea include new discoveries of Tasman, Janszoon and Cartensz. Beautiful detailing throughout with rivers, mountains and forests, as well as sailing vessels and a compass rose. Several animals are shown on the African continent such as an ostrich, elephant and rhinoceros. The title is enclosed in a decorative cartouche on the lower left, and a cartouche with dedication to Henrico Spieghel, the Senator of Amsterdam, as well as his coat of arms, are shown at the top left.

Artists and Engravers: The Visscher family were art and map dealers in Amsterdam during the 17th century. Funded by C. J. Visscher (1587-1652), the business was continued by his son and grandson both named Nicolaes. Nicolaes Visscher I was born 1618 in Wenns, Austria. He died 1679 in Linz. Nicolaes Visscher II (Amsterdam; 1649-1702). After the death of Nicolas II, his widow passed the business to Pieter Schenk.