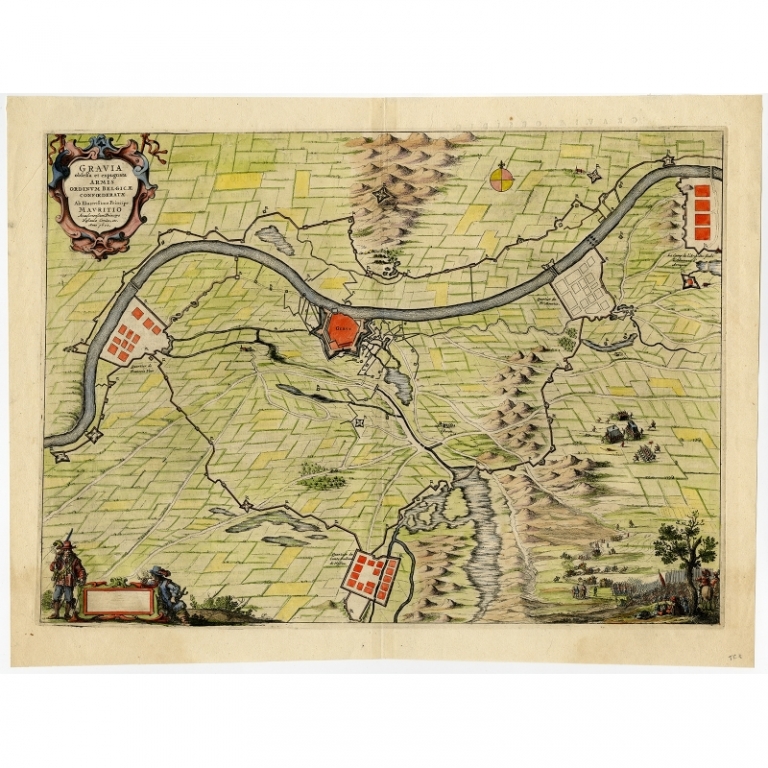 Description: Antique print, titled: 'Gravia oblessa et expugnata […] Mauritio […] 1602.' - View of the conquest for Grave in The Netherlands in 1602 by Maurits of Nassau. Tekst in Latin on verso. This plan originates from the famous city Atlas: 'Toneel der Steeden' published by Joan Blaeu 1649.

Artists and Engravers: Made by 'Joan Blaeu' after an anonymous artist. Joan Blaeu (23 September 1596 - 28 May 1673) was a Dutch cartographer. He was born in Alkmaar, the son of cartographer Willem Blaeu. In 1620 he became a doctor of law but he joined the work of his father. In 1635 they published the Atlas Novus (full title: Theatrum orbis terrarum, sive, Atlas novus) in two volumes. Joan and his brother Cornelius took over the studio after their father died in 1638. Joan became the official cartographer of the Dutch East India Company. Around 1649 Joan Blaeu published a collection of Dutch city maps named Tooneel der Steeden (Views of Cities). In 1651 he was voted into the Amsterdam council. In 1654 Joan published the first atlas of Scotland, devised by Timothy Pont. In 1662 he reissued the atlas with 11 volumes, and one for oceans. It was also known as Atlas Maior. A cosmology was planned as their next project, but a fire destroyed the studio completely in 1672. Joan Blaeu died in Amsterdam the following year.

Antique print, titled: 'Gravia oblessa et expugnata […] Mauritio […] 1602.' - View of the conquest for Grave in The Netherlands in 1602 by Maurits of Nassau. Tekst in Latin on verso.